Games are such type of thing which relieves the stress of people, improves hidden skills of them, and feels fresh after playing it and best way to pass time. Whenever we are feeling bored we opt to play games first rather than doing anything else.

In this world of contemporary we all are liable on modern technologies and so are games. We can see that each and every game which we use to play outdoor and indoor are now available online like cricket, football, table tennis, chess, carom, etc. Not a single game is there which is not available online; we can find and download any of the game online in just a couple of seconds. Also, these online games provide us the facility to invite our friends online and play the game together to stay connected with each other. 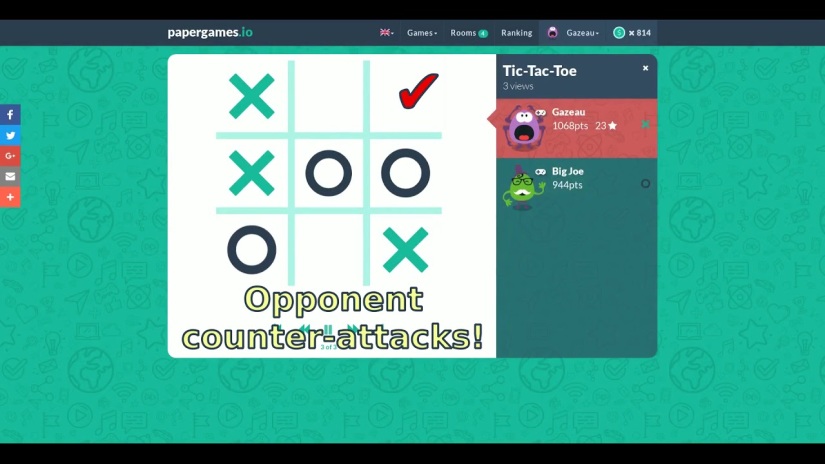 Tic-tac- toe is such type of game which can be played by any age of people and any time. Students use to play this game in their boring lectures, also it can be played with friends and family any-time and every-time we play this game it comes with a new twist and turn. The rule of this game is very simple but it is equally a very tricky game at the same time. There will be 3*3 matrix in which one user can mark as ‘O’ and another user mark as ‘X’ is each box turn by turn, the user who marks first 3 consecutive horizontally, vertically or diagonally wins the game. To increase the game complexity, 4*4 and 5*5 matrix are also being played. Parents must prefer their children to play this game in childhood time as it increases their skill level and they become capable to play the more complex games then this game.

Childhood is the golden period of life and playing games in childhood will add a cherry on the cake. In olden days when there were no internet and smartphones, children use to play outdoor games like cricket, football, badminton and indoor games like chess, carom, paper games, etc. These games not only entertain children but also improve their following skills:

Therefore children can develop skills while having fun playing games. Now, if we talk about paper games then it is such type of game that we can enjoy with family, friends, and children. Every age can play paper games and the best time to pass with your close ones. Among the paper games, Tic Tac Toe is one of the favorite game among people as it is easy to learn, can be played anywhere. It is such type of game which converts boring evening to fun evening. The rules of this game are very simple, there will be 3*3 matrix where users have to tick ‘O’ and ‘X’ turn by turn and the player who makes the constant three marks of any ‘X’ and ‘O’ diagonally, vertically or horizontally wins the game. It may look simple but it is a very tricky game to win as there are 255168 winning moves which user can make. Researches have shown that by playing this game one can increase their mental performance and capacity.

In this digital world where everybody is busy in their smartphones and busy life, people don’t have time to take the paper-pencil out and play the game; they would rather choose to play online games as a result paper games were in a merge of extinct. But how about if you can play tic tac toe online, then there is no need of paper and pencil to play paper games and also you can play this game with your smartphone, PC, tablet and Laptop. This is all possible with https://papergames.io where you can play tic tac toe multiplayer and tic tac toe 2 player. We provide players to play with their friends by inviting them online and earn credits. We also offer an online tournament where players can score points. Also playing tic tac toe will provide the following benefits to your children:

Tic Tac Toe is not only about to think how to win by making winning moves but also to make sure that we combat the opponent moves so the player needs to focus well on the game to win it.

By playing Tic Tac Toe you will get mental exercise and that is why we love to play this game. With Paper Games you don’t need to waste the paper for playing this game and also you can enjoy this game by inviting your friends online and can stay connected with each other. So your wait is over now you can quickly visit our website Paper Games and we will make you remember your old days.

Tic-tac-toe is a board game that is played by many children and even adults across the globe. It is played between two players, and one must know about the tricks as there are nine ways to place your O’s and X’s on a Tic Tac Toe board game.

The game is all about using your brain to know how to win tic tac toe and this helps in giving your brain a good workout. If you do not want to lose in this game, look up to the best and leading tic-tac-toe website, which is packed with a strategy, guides and some tips and tricks to make you a pro in this board game.

How to play and win

The game is played through the 3×3 grid of squares, which sums up to nine and the game because only interesting when you get to discover the unbeatable solution, after which you will move on to other games.

It also has a tic tac toe multiplayer version, where you can connect with other players by connecting to the multiplayer server, and go head-to-head with each other. In this game, one player with have the noughts and the other will have the cross. If you get to the line of three of your given symbols in one line, you win the game. To avoid losing, follow the given below points for the game. They are:

In a tic-tac-toe online game the challenging part is to determine, the best moves to win the game. Same goes for your opponent, if that person knows what he/she is doing, then the loss will be on your side, because this is a zero-sum game, where the match ends with one side winning, and the other side losing. However, you and your opponent, both share an optimal tic-tac-toe strategy, then the tables might turn and the game will end with a tie.

There are four types of players, available in this tic-tac-toe 2 player game namely, novice, intermediate, experienced and expert. The novice makes random moves, intermediates block their opponents from winning, the experienced are well informed about certain squares that will make them lose the game, and the experts are who are labeled as unbeatable, or means they will never lose.

A brief history of the game

The game of tic-tac-toe was first played in the Roman Empire, around the 1st century BC. It was known as Terni lapilli, which means three pebbles at a time. The game was so popular during that era, until now you will find the game’s grids are been chalked on the Roman ruins. The print reference to Play tic tac toe was known by the term “noughts and crosses”, which was the British name of the game and came to light during 1864. By 1884, the first print reference was established as “tic-tac-toe”, but was referred to a children’s game that was played on a slate.

Play the game and win

If you want to show your skills, learn, or play it casually look up to the best online website to play the game of tic-tac-toe with several tips and tricks. The guide will allow you to understand the game, the more you play, the pro you become.